North Carolina opens its first state funded psychiatric hospital in Raleigh. Then called the NC Hospital for the Insane, it was later renamed Dix Hospital in tribute to a family member of Dorothea Dix the crusader and later Civil War nurse who lobbied the state legislature to establish and fund the hospital.

Most scholars agree that modern nursing began in the United States during the Civil War. The overwhelming morbidity and mortality rates of soldiers on both sides of the conflict were a catalyst for women to band together to respond to the crisis. North Carolina nurses included the women volunteers who organized the "Wayside Hospitals" in many railroad towns, women who volunteered to go to the battlefields and render aid, as well as those men and women employed as hospital nurses by both the Confederate and Union governments. Above photo: Private William Henry of Co. B, 31st North Carolina Infantry Regiment in uniform (probably from Anson County). Photograph shows identified soldier who enlisted at age 53, served as a nurse in hospitals at Washington, North Carolina, and Summerville, South Carolina, and was a prisoner at Roanoke Island, North Carolina. Circa 1983. Courtesy of Library of Congress.

Newspaper clipping about the history of the Wilson Confederate Hospital:

The Freedman's Bureau operated several hospitals in North Carolina during Reconstruction. They primarily served the needs of the formerly enslaved people and white Union sympathizers.

The Progressive Era in the United States was a period of reform which lasted from the 1890s into the 1920s. Progressive reformers, mostly college educated and middle class, sought to ameliorate a wide range of economic, political, social, and moral problems.

Founders of hospitals and schools of nursing in North Carolina sought to improve physical and mental health using the latest scientific knowledge. The North Carolina State Nurses Association was formed in 1902 to protect the health and well being of the public through regulating the delivery of safe, effective nursing care.

Lula Owl (Gloyne) was born on December 28 on the Qualla Boundary (sometimes mistakenly called the Cherokee Indian Reservation). Nurse Gloyne was the first Eastern Band Cherokee Registered Nurse. She served in WWI as a 1rst Ltn in the US Army nurse corps. In the 1920s, she served her tribe and community as a US Indian Health Service nurse providing home health and midwifery services. In the 1930s Gloyne was instrumental in the founding of the first hospital for the Eastern Band Cherokee tribe.

Mary Lewis Wyche of Vance County established the first school of nursing in the state: Rex Hospital School of Nursing in Raleigh, NC. In 1902, Wyche organized the Raleigh Nurses Association and then the NC Nurse Association. This early group of nurses was responsible for North Carolina passing the first nurse licensing law in the country. Wyche wrote "The History of Nusing in North Carolina" that was later edited and published posthumously by nurse Edna Heinzerling in 1938.

Watts Hospital School of Nursing opened in Durham and remains the oldest school of nursing in continuous operation in the state.

Broughton Hospital (then known as the Western Hospital for the Insane) opened a nursing school for white women. 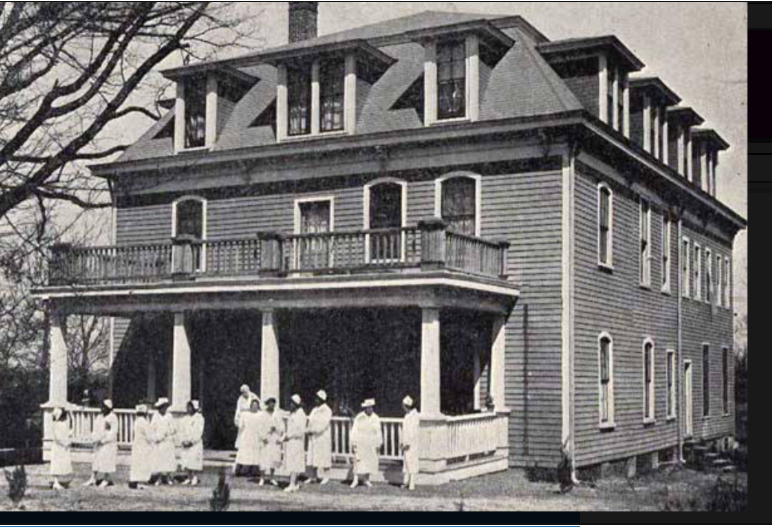 A typhoid epidemic at the state Normal School for Women (now UNC-Greensboro) brought nurses from across the state together.  This was a catalyst for the founding of the NC Nurses Association (NCNA).  Here is an excerpt from the NCNA papers found in the State Archives in Raleigh, NC:

Typhoid Fever at the Normal

When it was seen that the state could not supply nurses in sufficient numbers to care for the typhoid cases at the Normal in September 1898, several nurses from Virginia and available practical nurses were called in.  Members of the faculty and a few students gave valuable assistance.  Thus the scarcity of nurses in the state was brought sharply to the attention of the thinking public.

Chatting among themselves in off day hours about a state organization was recalled by Miss Batterham.  That was the first acquaintance of the nurses of the West with those of the East.

Before the opening of the spring term, the dormitories had been fumigated and walls and floors cleaned.  Single beds with good mattresses took the pace of double ones.  All plumbing was overhauled, and things generally made sanitary.  To the gratification of Dr. McIver and members of the faculty, there was a good attendance at the spring term.

The Highsmith Hospital School of Nursing opened in Fayetteville.

Early history of college infirmary nursing found in the NCNA papers at the state archives in Raleigh.

During Governor’s Swain’s administration as President of the University of North Carolina, Dr. Wheat of the English department lived on a lot where the Women’s Building (Spencer…) now stands.  On one corner of this lot was built and equipped a three-room cottage for the College Infirmary.  The ladies of the community took turns in nursing the sick students.  Among these volunteer nurses were Mrs. Hubbard, Mrs. Fetter, Mrs. Mallette, wife of a practicing physician, and Mrs. Wheat.  Dr. Wheat was also helpful and sympathetic, and it is most likely due to his influence that the infirmary was placed near his dwelling.  Lee Couch, a white man… was for years a nurse and orderly.

There is a no doubt that there were later infirmaries, but definite information is unavailable.  In 1889 and for several years thereafter, the sick students remained in their rooms where meals were sent from their respective boarding places.  For some years the University of North Carolina has had a large and well-equipped infirmary, with two nurses.  Special nurses are often summoned.  Surgical cases are taken to hospitals in Durham.

In Salem Academy much nursing was done by the teachers, especially in the care of children.  Many of the girls who came from plantation homes had scabies.  At times there were so many cases that a special building and nurse were set apart for them.  In a later building, rooms known as “sick rooms” were set aside and a practical nurse was placed in charge.  During the severe epidemic of smallpox, the teachers helped, as they had during the epidemic of black measles.

With the 20th century came the trained nurse who followed Mother Peck’s long years of service.

The 27 years of faithful service of Miss Betty Armfield at G.C.W. are remembered by many appreciative students and their mothers.  The nurse gave medicine for minor ailments, but called the doctor if there was fever of if unusual symptoms developed.  Students in other schools were cared for in much the same while.

A well-equipped infirmary was early constructed at the Normal and Industrial School in Greensboro.  A graduate nurse was in charge, except for a short time.  From its opening, the “Normal” has had a woman as resident physician: Dr. Anna M. Grove has acceptably filled that position except for in the first year, and during several leaves of absences.

It was the rule of the school that any student who had been exposed to any outrageous disease should at once report this fact to the school doctor.  While one student was at home for the Christmas holidays, measles developed in the home.  The mother went out into the yard for an airing, before going around her student daughter.  However, in due time this student developed measles.  Two other cases also developed.