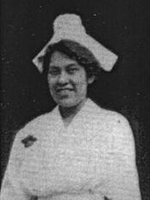 Lula Owl Gloyne was the first Eastern Band Cherokee Indian (ECBI) Registered Nurse and possibly the first Native American Registered Nurse in the United States. She was the only ECBI officer in WWI, serving as a 2nd Ltn in the US Army Nurse Corps. In the 1920s, she served her tribe and community as a US Indian Health Service nurse providing home health and midwifery services. She was often seen walking, riding a horse or using an ox cart to get to laboring women and ill families living in the most rural sections of the Qualla Boundary. In the 1930s Gloyne was instrumental in the founding of the first hospital for the Cherokee tribe. Nurse Gloyne went to Washington, DC in 1934 and addressed the Commissioner on Indian Affairs on the need for a hospital for the Eastern Band Cherokee. Her advocacy helped secure a hospital which provided the first inpatient care in Cherokee, NC. Nurse Gloyne became the head nurse of the hospital while continuing in her capacity as “field nurse” for the reservation. After her official resignation in 1969 at age 77, Gloyne continued to be active in a variety of community health related activities.