Overview of the History of North Carolina Nursing Education

Nursing education in North Carolina, like most of the United States, began in hospital based apprenticeship-type programs. The programs typically lasted 3 years, students lived in a nursing dormitory on the hospital grounds and the programs varied from excellent to haphazard at best. The first nursing education program in North Carolina was at Rex Hospital in Raleigh which began in 1894. Mary Lewis Wyche was the first nursing director of the program. Within the decade many hospital schools of nursing opened their doors. Through the 1950s, these schools of nursing were segregated by race (as were the hospitals that housed the nursing schools) and only admitted female students. 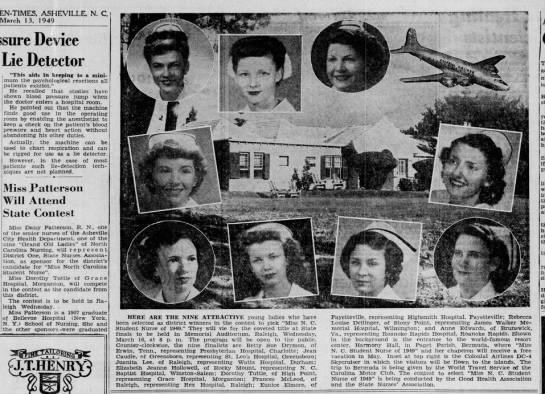 In the decades following World War II, nursing education changed rapidly in North Carolina. In 1940, the University of North Carolina -Chapel Hill (UNC - CH) School of Public Health added a Department of Public Health Nursing. Ms. Ruth Hay, RN was its first Director, as well as the first full time female professor at UNC-CH. Margaret Blee was the first faculty member hired in the Department. 36 students were admitted in the fall of 1941 to earn either a Certificate in Public Health Nursing or a Bachelor of Science in Public Health Nursing (BSPHN). UNC-CH admitted its first class to the first Bachelor of Science in Nursing (BSN) program in the state in 1950. North Carolina Agricultural and Technical University, Winston Salem State University and Duke University also initiated BSN programs in the 1950s. (Image: Miss NC Student Nurse contestants 1949, from the Asheville Citizen-Times March 13, 1949, p.4.)

Area Health Education Centers were created in North Carolina in the early 1970s across our state, to provide educational opportunities (continuing education as well as degree and certificate programs) for nurses and other health care professionals. They remain vital to maintaing and upgrading the quality of health care delivered across North Carolina.