Photo from the "Good Health Campaign" of the 1940s. 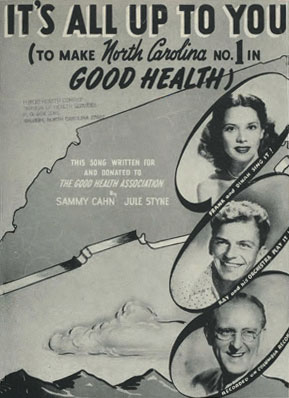 Photos from the "Good Health Campaign" of the 1940s.

Membership in NCSNA increased to 2,251. Memebrship percentages were: 45% private duty, 38% institutional and 9% public health. Since the majority of NCSNA members were in private duty, maintaining the standards and currency of the county registries was important work for the organization and its district associations. NCSNA partnered with the University of North Carolina at Chapel Hill to offer college credit coursework for Registered Nurses in public health and nursing administration.

World War II  created an acute nursing shortage both in military service and on the homefront. A 1941 issue of the North Carolina State Nurse Association's Tar Heel Nurse magazine appealed to its readers to encourage inactive nurses to take refresher courses, help recruit high school and college graduates to nursing schools, and join the military nursing services. Military nursing took women from small towns cities in North Carolina and transported them around the world. Their wartime experiences broadened their lives as well as their expectations. After the war, many veterans, including nurses, took advantage of the increased educational opportunities provided for them by the federal government's GI Bill. World War II changed American society irrevocably and redefined the status and opportunities of the professional nurse.

The Cadet Nurse Corps shortened nursing training from 36 to 30 months setting the stage for ADN education.  In addition, the role of nursing assistants to meet war time needs helped bring about the role of the LPN in NC.

Nurse Ruth Hay, a national leader in public health nursing education, was appointed to establish the University of North Carolina at Chapel Hill (UNC-CH) Department of Public Health Nursing in the School of Public Health. Hay was the first female professor appointed to the University's faculty. In 1946, the Department of Public Health Nursing instituted a cooperative program with North Carolina Central University (NCCU) in Durham, whose African-American students were denied admission to UNC-CH. Under the leadership of Lincoln School of Nursing graduate Mary Mills, African American Registered Nurses were able to earn a public health certificate after one year of study at NCCU.

The North Carolina Association of Nurse Anesthetists is formed. Reports given at the 1943 NC Nurse State Association Annual Convention.

Miracle of Hickory - In 1944 the worst  polio edpidemic to hit the US  occured in Hickory, NC in 1944. City residents with the help of the National Infantile Paralysis Association opened an emergency open air polio hospital in 54 hours and treated hundreds of victims for the next several months. Nurses from across the state and nation volunteered to help out in this crisis.  Public Health Nurse Frances Allen was the head nurse of the Emergency Polio Hospital in Hickory, NC.  It treated both white and African American patients, perhaps making it one of the first integrated health care institution in NC

World War II ends in victory for the US and its allies.  NC led the country in rejections for the draft due to health reasons.

NC political and health care leaders, in part responding to the draft rejection rate of almost 50% of NC young men as well as other poor health statistics began the "Good Health Plan" campaign to increase the number of health care providers and facilties in the state. Nurse Flora Wakefield of Raleigh served on the Executive Committee.  The UNC Chapel Hill School of Nursing in Chapel Hill, which opened in 1950, was an outgrowth of the Good Health Plan.  The Good Health Association and the NC Student Nurse Association sponsored a "Miss North Carolina Student Nurse" pageant for several years.  Below is the 1949 winner

The Hill Burton Act passed the US Congress and supplied millions of dollars for hospital construction thus helping move more nurses into hospital based employment and out of private duty care.

The NC Nurse Practice Act was amended to include regulation of Licensed Practical Nurses to work under the supervision of physicians and Registered Nurses. In addition, the Act was also amended to require annual renewal of registered nurse licenses.

The U.S. Social Security Act was amended to include funding for mental health services.

In 1947 the NCSNA became the collective bargaining agent (union representative) for nurses in the state who wanted a union.  These efforts were mostly squashed.  Here are somenewspaper articles about the efforts to unionize NC nurses in the late 1940s.

The first schools for Licensed Practical Nurses opened in the state.

In Charlotte, the first chapter, Iota, of the Chi Eta Phi nursing sorority was established in NC.  Chi Eta Phi began as a service organization composed of African American Registered Nurses.  Today, the organization is open to all nurses and nursing students and is focused on service projects and networking opportunities.  NC Nurse and former Dean of the NCCU nursing school, Helen Miller, wrote a book on the history of Chi Eta Phi that has a lot of information about the NC Chapter histories with photographs.

A plea from the American Red Cross for African American nurses to help with the NC polio epidemic.

VOLUNTEER NURSES ARE NEEDED FOR POLIO DUTY
WASHINGTON—(ANP)—
In response to urgent need for nurses in sections of North Carolina seriously affected by infantile paralysis, Negro nurses in scattered localities throughout the country are following the lead twelve Southern Negro nurses volunteering for polio duty, American Red Cross reported this week. Need for nurses continue to be acute in that area Red Cross said.
All Negro nurses available for service are urged to register as soon as possible with their Red Cross chapter. The Red Cross functions as a recruiting agency when local nursing resources are depleted; salaries and transportation of nurses assigned are paid by the National Foundation for Infantile Paralysis.
Serve on Polio Duty
Three Negro nurses recruited through Red Cross national headquarters during the past few days are among those who will serve on polio duty in N.C. Mrs. Gladys Johnson of Fort Worth, Tex., former Red Cross itinerant nursing instructor in Midwestern States, will serve as supervisor in the polio wards at the Kate Bitting Reynolds Memorial Hospital in Winstn-Salem and Estelle Coles, a recent graduate of Freedman’s Hospital School of Nursing in Washington, DC, has also has been assigned there. Earlier in the week Manna Beaman, Richmond, volunteered for service and was assigned to St. Agnes Hospital, Raleigh.
Plain Dealer; Date: 08-13-1948, Volume: 25; Issue: 31; Page: [6]
Kansas City, Kansas

The NCSNA voted to allow African American nurses to become members.    Here is an incomplete transcript of the debate about integration held at the white NC State Nurse Association Convention in 1948.

The  national report Nursing for the Future, also known as the Brown Report, recommended that nursing education be provided in colleges and universities but was generally met with hostility by physicians and hospital administrators. A follow-up report, A Program for the Nursing Profession, predicts the development of two levels of nursing: professional registered nurse and semiprofessional licensed practical nurse.

Merger of NCSNA and NCANRN Mental Health/Psychitric nursing expanded after WWII due to the number of returning veterans with PTSD as well as advances in treatments for mental health disorders: