UNC-Chapel Hill (UNC-CH) opens a School of Nursing and offers the first Bachelor of Science in Nursing (BSN) degree in the state. Dr. Elizabeth Kemble was appointed Founding Dean of the UNC-CH School of Nursing.

The Subcommittee on School Data Analysis for the National Committee for the Improvement of Nursing Services issues the "Nursing Schools at Mid Century"   in 1950 (the data was collected in 1949) influences nursing educators in NC and across the country.

The administrators of Hamlet Hospital School of Nursing in Hamlet, NC sued the NC Board of Nursing Examiners (NCBONE) contending that they didn't have the right to set standards for nursing schools.  After a lengthy court battle the NCBONE prevailed.  Here is the final judgement in the case.

Report of the 49th NCNA Convention in Greensboro in 1951

The US entered the Korea War siding with South Korea against communist North Korea.  Less than 500 RNs served on the ground in Korea because most of the wounded were flown to military hospitals in Japan for treatment.  Two NC nurses who served in Korea were  Mattie Donnell Hicks and Julia Baxter.

An annual Institute was held for midwife training at the Fayetteville State Teachers College in Fayetteville. This Institute was discontinued in 1959 as the number of midwives  declined to less than 350 in the state. The responsibility for training midwives was then given to local health departments. Recommended standards for midwife practice were established and enacted in 1956. 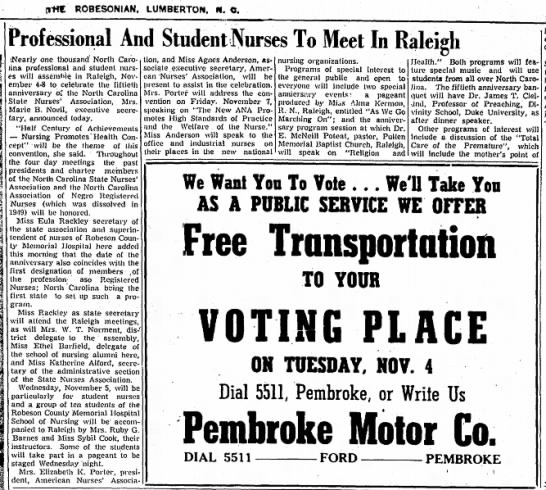 In an effort to avoid integration of the UNC-Chapel Hill School of Nursing, the NC legislature appropriated $200,000 to open BSN programs at NC A&T in Greensboro and WSSU in Winston-Salem.  Racially separate BSN programs endured for over a decade in NC.

A MAJOR political fight occured in the General Assembly as a coaltion of physicians and hosptial owners wanted to dilute the Nurse Practice Act.  In the end a compromise was reached. 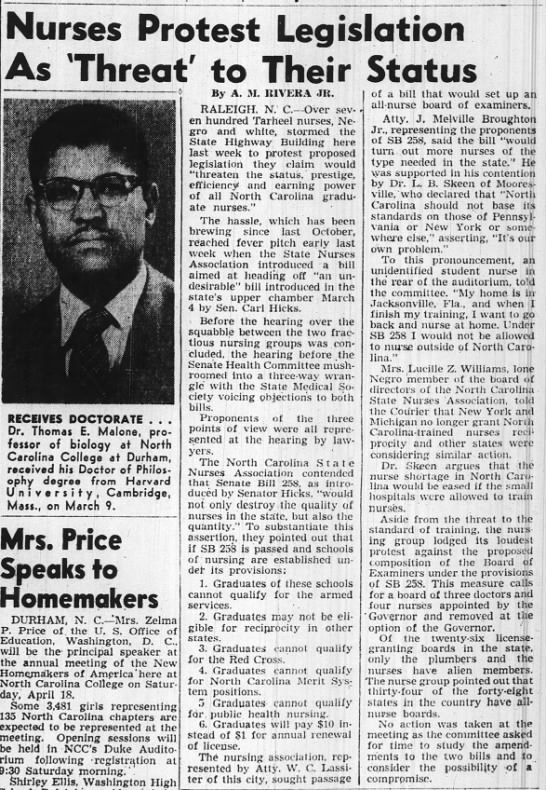 The North Carolina State Nurse Association (NCSNA) convention delegates endorsed the 40 hour work week and immediate implementation of the resolution was begun. The NCSNA staff began a study of salary differentials based on race to begin eliminating pay discrimination in employment. 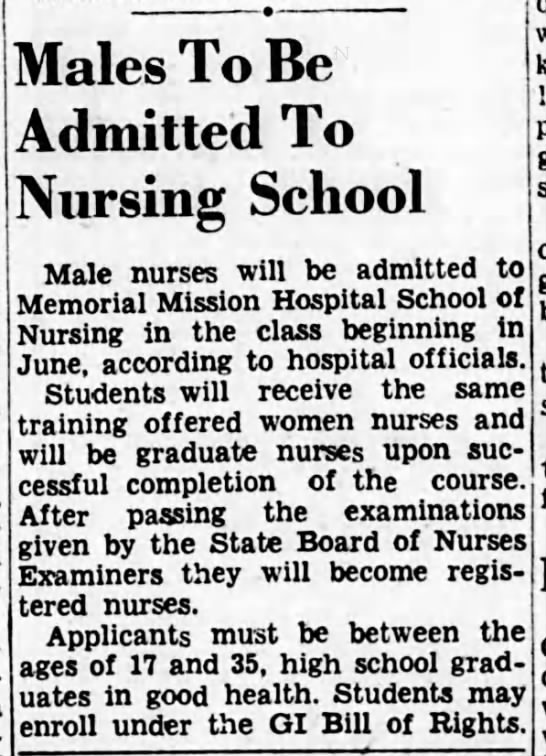 NC Memorial Hospital opened one of the nations’ first Intensive Care Units requiring advanced clinical preparation for nurses who worked in that unit.

The NC Board of Nursing issued standards for nursing education programs.

The book 20,000 Nurses Tell Their Story was published in 1955.  The section on psychiatric nursing was taken from a study done on NC nurses.

Watts Hospital School of Nursing was the first three year diploma school in North Carolina to receive full accreditation by the National League for Nursing.

The National League for Nursing issues the Report on Hospital Schools of Nursing.

Duke University introduces a graduate program to prepare clinical nurse specialists. It is the first clinically focused Master of Science in Nursing program in the country.