In 1931 the Duke Endowment studied hospital schools of nursing in hospitals that averaged fewer than 20 patients a day.  They found that those schools were unable to provide a professional education for nurses and that nursing students were sometimes used for cheap labor. 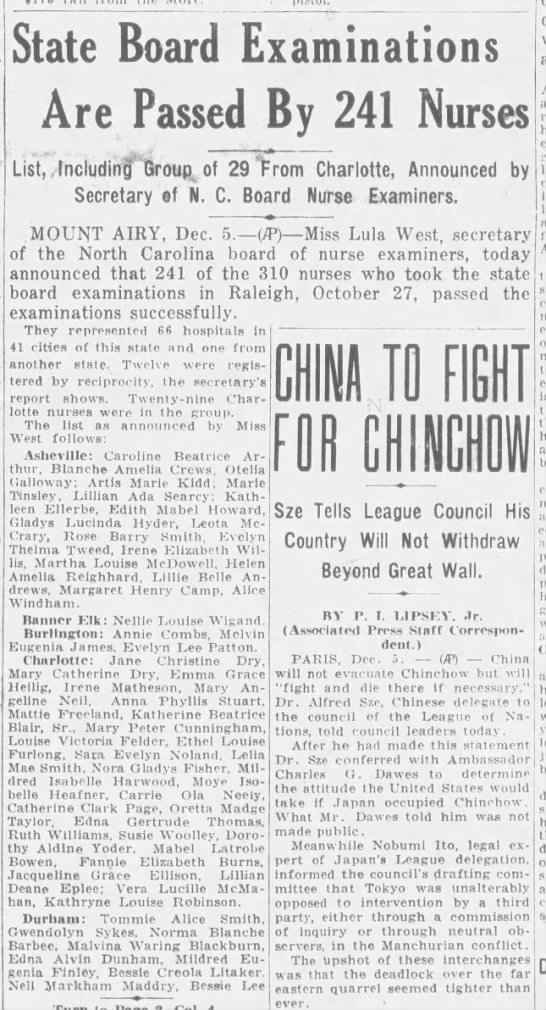 NC Board or Nursing guidelines for Schools of Nursing.

The federal government’s response to the human suffering experienced during the Great Depression, called the New Deal, included funding public health nursing programs. In NC the number of public health nurses increased from 65 in 1933 to 297 in 1940. These new nurses, using funds from the WPA, ERA and the Social Security Act performed many valuable functions including inspection and referral of school children, home health care and immunization clinics for thousands of North Carolinians during this time. The benefits of public health nursing were evident to all. Article about Nursing in New Deal Programs in NC.

Many "New Deal" agencies funded nurses in NC during the Great Depression.  This book, "Emergency Relief in NC" details many of those programs and provides reports and other primary sources for information about this time.  Also see "We met the challenge: Nursing in NC in the New Deal"  by Pollitt and Reese

1935 program of the annual meeting of the NC State Colored Nurse Assoc.

North Carolina became the first state to offer family planning/birth control services through its public health agencies and to permit public health nurses to advise clients about methods of contraception. Frances R. Pratt, RN was hired by the NC Board of Health to organize and oversee the program.

Rules for registration with the Winston-Salem Nurses Registry (for White nurses).

‹ The Goldmark Report up Duke University School of Nursing History ›