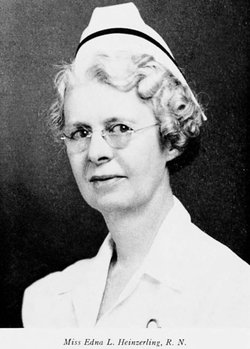 Edna Heinzerling, RN,  Director of the Baptist Hospital School of Nursing, and Director of Nursing at Baptist Hospital from their opening in 1923 until her retirement  in 1951 was born in on April 2, 1888 in Washington, D.C.  to J.E. and Sarah Chance Heinzerling.Heinzerling was a nursing graduate of the Whitehead Stokes Private Sanatorium (now Rowan Memorial Hospital) in Salisbury, NC.   Before Heinzerling founded the nursing school at Baptist Hospital, she was the Superintendent of both the Badin, NC Hospital and the Twin Cities Hospitalin Winston Salem.  She was active in all the major nursing organizations and issues of the 1920s-1940s.  She served in every office, including President of the North Carolina State Nurses Association in 1947-48.  Heinzerling completed and edited the History of Nursingin North Carolina after Mary Wyche died in 1936.  In addition she wrote a history of Baptist Hospital School of Nursing in 1960. Heinzerling passed away in Statesville on November 8, 1977 at age 89.

From the Appalachian State University Timeline

1938: The college infirmary is reopened as Watauga County Hospital, where students and Watauga County residents could be treated on an in and out-patient basis. Hospital operates until 1968, when it is renovated to become the Administration Building Annex, and eventually renamed Founders Hall. Miss Edna Heinzerling served as superintendant.