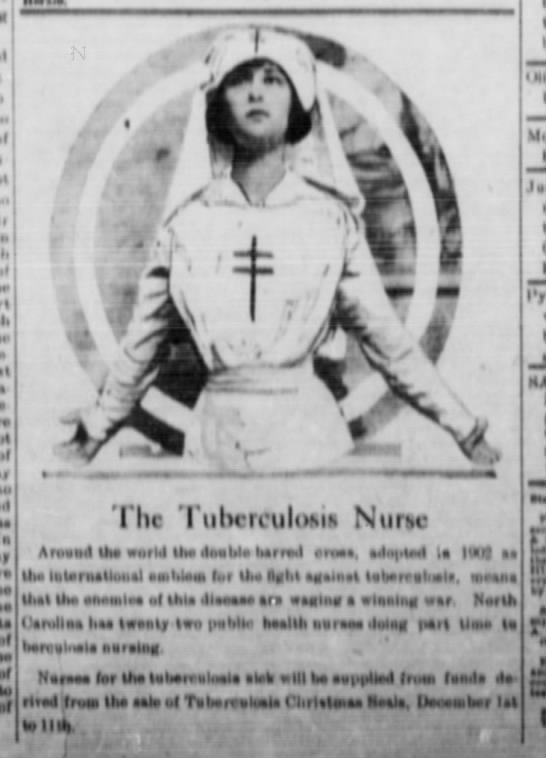 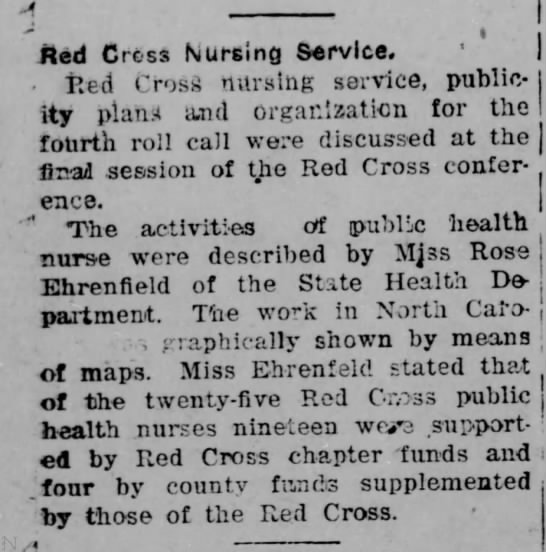 The Bureau of Maternity and Infancy is created and funded with federal dollars under the Sheppard Towner Act. Miss Rose Ehrenfeld was hired as the first state nursing supervisor of the Bureau. By the end of the decade there were 94 nurses employed by county health departments using these funds. The nurses made home visits and staffed maternity and new baby clinics in the local health departments.

Early history of nursing in NC from the Ashevlle Citizen's Times:

Early history of nursing in NC from the Ashevile Citizen's Times

In 1923 a Rockefeller Foundation funded national study of nursing schools titled Nursing and Nursing Education in the United States, commonly known as the "Goldmark Report" advocated the upgrading and standardization of nursing school curricula in both the classroom and clinical setting.

Nurse Edith Redwine was hired as the first full time nursing instructor in the state at Watts Hospital School of Nursing in Durham, NC.

The Biennial Report of the NC State Board of Health of 1924-26 stated that midwives delivered more than 30% of babies in North Carolina and that more than 5,000 midwives were in active practice. That year also marked the adoption of Model County Midwife Regulations. Annual requirements to practice midwifery under the new law included an physical examination, inspection of the midwife's bag of supplies and instruction and demonstrations given by physicians or nurses about sanitation and techniques necessary for assisting in normal deliveries. An annual permit to practice midwifery was given to people who satisfied the law's requirements.

North Carolina adopted the Model County Midwife Regulations, requiring that all midwives receive instruction from physicians or nurses in order to receive a permit to practice. In 1930, the estimated number of lay midwives practicing in NC was 3,000, of which 2,200 held properly granted permits, by 1950 that number was down to 1,000.

A  North Carolina Board of Nurse Examiners report showing results for the annual state examination.

A list of  NC schools of nursing classified by average daily census.

Many textile mill owners developed "Company towns"  or "mill villages" and several hired public health nurses.  Here is a report by Hariette Herring about the state of health and nursing in Welfare work in mill villages published in 1929.  Chapter 8 is abouty health care, but nurses are mentioned in other chapters as well.

In 1929 the Stock Market in the United States collapsed. This caused the worse economic depression the country has ever experienced. The federal government’s response to the human suffering experienced during the Great Depression included funding public health nursing programs and funding for nures wishing to continue their education to become certified as public health nurses. The number of public health nurses increased from 65 in 1933 to 297 in 1940. These new nurses, using funds from the New Deal sponsored programs such as the Works Progress Administration, Emergency Relief Administration and the Social Security Act, inspected school children, provided home health care and immunized thousands of North Carolinians during this time. The benefits of public health nursing were evident to all.