Learn more about the history of nursing in Durham County

Description: Watts Hospital. Ambulance & Nurse. ca. 1940. Gleaming white ambulance (a Rolls?) with Red Cross insignia, is parked in front of main entrance of the hospital. Nurse stands beside the side door.

Voices is an excellent new book (2013) written by Dr. Evelyn Wicker  that chronicles the history of the Lincoln Hospital School of Nursing.

Lincoln Hospital and School of Nursing Although this is titled "Duke Hospital" it is about Lincoln Hospital that the Duke family initially funded:

HIstories of NCCU School of Nursing

Watts Hosptial and School of Nursing

Clara Beckham Lawrence Mrs. Lawrence was born in 1910 in CHester O, S.C. ... After finishing high school, she completed her nurses training in Columbia, SC nad took a course in practical nursing at Harlem Hospital in New York City.  She completed her B.S. degree at Johnson C. Smith University in Charlotte and an MSPA degree from NCCU in Durham, NC.  SHe worked as a Supervisor of Nursing at Knoxville General Hospial, public health nurse at the Charlotte city and Mecklenburg County Health Departments and Chief Nurse at teh VA hospital out-patient clinics in Baltimore.  From 1957-1974 she was on the nursing faculty at WSSU. 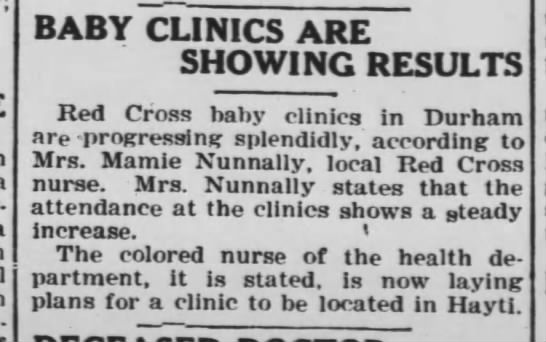 Through the liberality of the American Tobacco Co Lincoln Hospital of Durham now has the services of a settlement worker and visiting nurse. Miss Julia Latta a graduate of St. Agnes Hospital, Raleigh, and Superintendent of Nurses at Lincoln Hospital has charge of the work; and has been able to accomplish visible results by personal instruction  in the elements of sanitation and hygiene. As one doctor reports “she has taught the people everything from washing floors to whitewashing fences”.

... During Day’s second year as supervisor—1918—Durham faced the Spanish flu pandemic, which was sweeping the world and would eventually kill at least fifty million people worldwide.26 Although the city and county schools were closed for six weeks, teachers who participated in efforts to contain the disease continued to be paid their salaries.27 Miss Day, as well as Mr. Husband (who had returned to being a classroom teacher) and many other teachers, worked with Mrs. Julia Latta, Durham County Health Department’s first black nurse, to fight the pandemic.28

A bit more about Julia Latta 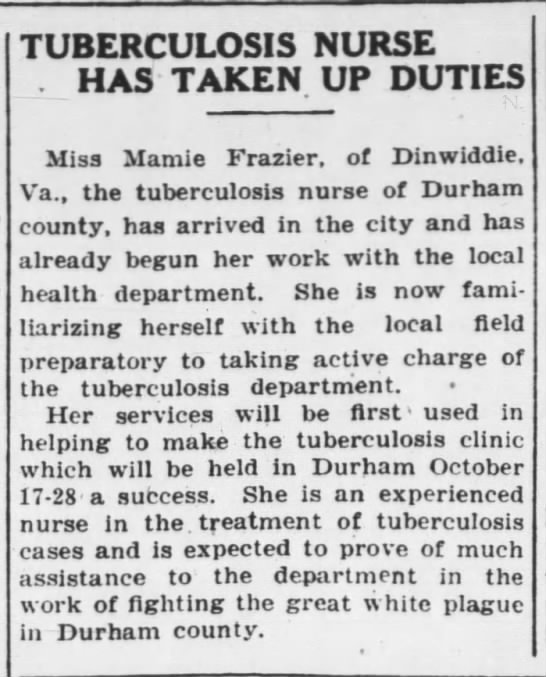 Note the pay inequities between the white and African American nurses pay!

Durham had 8 public health nurses in 1916