Lucille Zimmerman Williams was born in 1907 in Anderson, S.C. to a set of parents heavily involved in their local church; her father was a Baptist minister, and her mother a missionary. Throughout her life, Williams’ career as a field nurse took her up and down the east coast until she arrived at Lincoln Hospital (Durham, NC) in 1945. Adorned with her signature handkerchief, Williams’ focus on bedside manners and etiquette influenced the way she was perceived by her students and patients. Lucille Zimmerman Williams was known for her hard work at Lincoln Hospital (Durham, NC), but she is remembered for her demeanor, and the way she interacted with those she came in contact with.

Williams’ education began at Morrison College in Sumter, S.C. and continued on until she graduated from St. Agnes School of Nursing in Raleigh. Eventually, Williams earned a B.S. in Public Health Nursing from North Carolina Central University in 1958. However, Williams’ was excellent at her job not simply because she was well educated, but because she had a plethora of field experience as well. In 1934, Williams became a field nurse for the Farm Secretary Administration, and traveled the east coast working with immigrants. Even during the early stages of her career, Williams was known for the way she treated her patients with kindness and respect; she often took pleasure in afternoon tea with West Indian migrants. Her dealings would eventually bring her to Lincoln Hospital (Durham, NC) in 1945, where she finished her career.

Upon her arrival at Lincoln Hospital, Williams took on the responsibility of the nurses training program, and went on to become the Director of Nursing at Lincoln Hospital. Her emphasis on etiquette, manners, and attire made her a huge hit with the patients, but also with her nursing students; Williams was hard to miss always wearing a handkerchief in her breast pocket. Williams was involved in many ceremonies and social events with her students, like the Capping Ceremony of the School of Nursing, and being involved with The Santa Filamena, the nursing student’s honor society. Also, Williams was known for broadcasting health education programs over the radio with one of her students every other week.

Lucille Zimmerman Williams would stay in her position as Director of Nursing at Lincoln Hospital until the nursing school closed in 1971. While her accomplishments are of note, the most redeeming aspect about Williams is the way she executed her job with quality unparalleled, and compassion for her patients. Believing that her patients just wanted a kind word and sympathetic ear, Williams worked her way into their hearts. Williams paid special attention to the small details of her profession that often go unchecked, like bedside manners and attire, and in doing so, solidified herself as one of the major players in the history of Durham’s Lincoln Hospital. 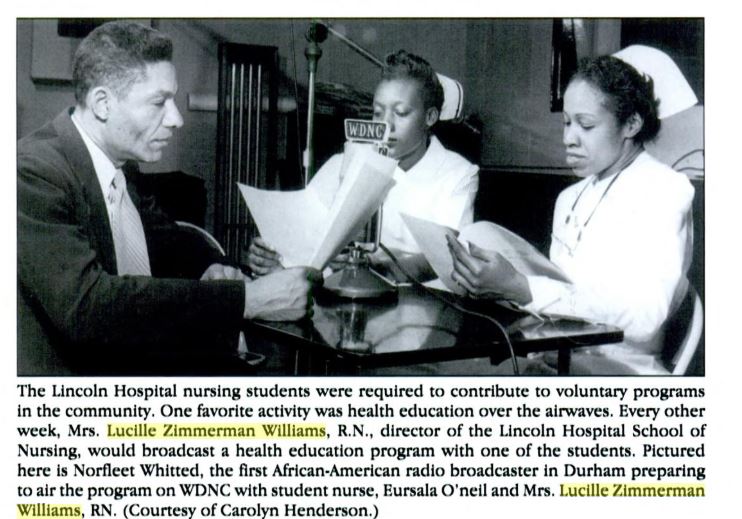