Learn more about the history of nursing in Wake County 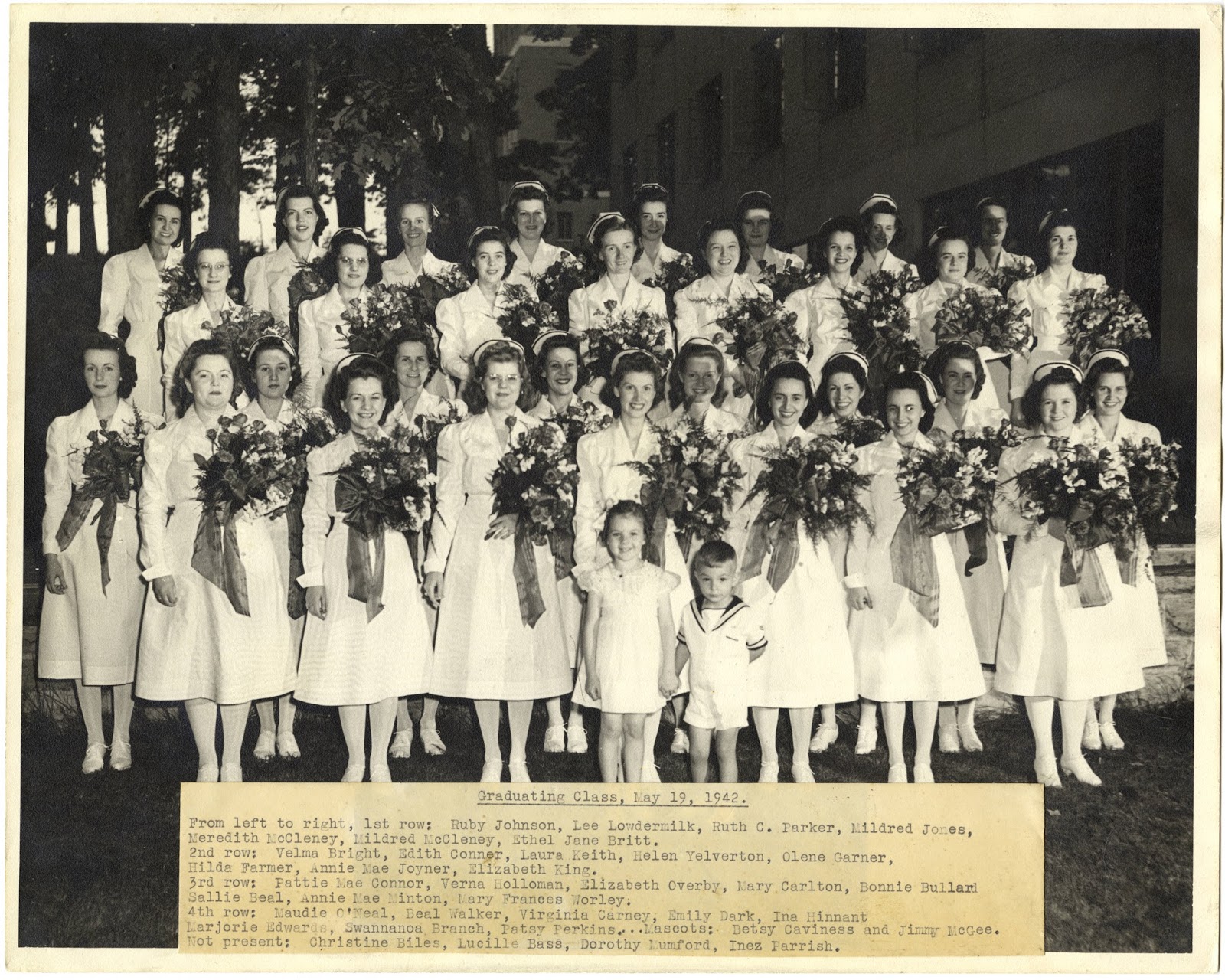 I am one of seven siblings, born and raised in Wake County, North Carolina. I attended Fuquay Consolidated High School in Fuquay Varina, North Carolina, until the tenth grade when I transferred to Apex Consolidated High School, in Apex, North Carolina. After graduation I attended Lincoln Hospital School of Nursing, in Durham, North Carolina. I had aspired to be a nurse since the fourth grade when I saw what I thought was a nurse in my geography book taking care of a native in Africa. Later I learned the picture was of a Catholic nun. At the time I had not been exposed to other religions except the usual Baptist and Methodist faiths. Before continuing my education, I took a one-year sabbatical before moving on to nursing school.

I arrived at Angier B. Duke Nurses Home late, the last in my class to arrive. Waiting for me were two upperclassmen named Davis and Flateau. My father had driven me to school in a borrowed old red truck; we were lucky to make it all. We could not go the speed limit so I kept a good lookout for Linwood Avenue. I arrived in time for the group photograph.

By my graduation in 1968, only nine of our original group of twenty-one had completed the program. My classmates left for various reasons and, yes, grades were a reason for dismissal.  I managed to stay one step ahead. Elsewhere 76 and 81 were considered passing grades. However, not at Lincoln; these grades were failing grades. To make things worse, the terminology had different meanings; for example, “sponge” was used for cleaning at home. The first chance that I got I looked up the use for sponges in medicine. It might have helped initially if there was a show and tell for all of the new preclinical students. We had a lot of material to digest in a matter of months in order to be prepared to care for assigned patients. I received an award at graduation for technical competency, no errors in medication administration. At one point, I received two failing grades and called my mother wanting to go home. She told me to hang up the phone, go upstairs, and study; my mother’s decisions were law. I went upstairs, learned to play pinochle and played every chance I got. It was a good stress reliever. I continued my same study routine and my grades improved. I passed state board on first writing.

I became a nurse because I wanted to care for people, to help them feel better, and assist in curing their ills. I did that and much more in many areas of employment. After graduating from Lincoln Hospital School of Nursing, I was recruited to work at Baptist Hospital in Winston-Salem, North Carolina. I returned to Lincoln Hospital, paid my dues by working one year in the Emergency Room under the guidance of Mrs. T. Jones and Ms. Edwina Sellers. Then I accepted a position in the Psychiatry Department at Duke University Medical Center (DUMC), IN Durham, North Carolina. Later I worked at the Veterans Administration Medical Center, also in Durham, North Carolina, in the Department of Medicine. Then I transferred to the area I love the most, the Department of Psychiatry at the Veterans Administration Medical Center. While at the Veterans Medical Center, I returned to school to earn my BSN. Due to scheduling problems, I resigned my position and went to work part-time in the Infirmary at North Carolina Central University and also did private duty nursing.

My degree allowed me to work in leadership and supervisory roles with the state of North Carolina. While working in Geropsychiatry with the state of North Carolina. I established a behavioral model program that was very successful.  I praised the staff for wanting to try new ways of doing patient care and the psychiatry unit for being extremely supportive. I returned to DUMC in 1981 to the psychiatry unit. Later I worked in the Duke Outpatient Surgery Program, Duke Comprehensive Sickle Cell Center and a Women’s and Children’s Medical Outpatient facility. I assisted the Department of Social Work as a Discharge Nurse Coordinator; served as night supervisor (later changed to Assistant Director of Nursing) of Duke South (now Duke Clinics) and Duke North; and assisted with several research programs in the Department of Oncology and Hematology. I was employed at North Carolina Central University on two occasions in my nursing career; first in 1994 as night charge nurse in Student Health and in 1998 as a tutor/ counselor on a special grant in the Department of Nursing. Six years ago I worked with a community owned Health Education Company to teach non-nursing personnel to administer medications, and taught blood-borne pathogens and seizure precautions. While employed with this company I became certified in the Medicaid Personal Care Services Curriculum.

Over the years I have received awards for job performances, as well as received Civic and church recognition. I can honestly say my initial education from Lincoln Hospital School of Nursing prepared me for a variety of positions. What do I hope to leave as a legacy, besides my rite of passage? I hope that I did make a difference in all the lives I touched, for the better.

Lastly, in my leisure time I was an amateur bowler and have won several tournaments. I am also a lifetime member of the WIBC National 600 Club.

I was born in Wendell, North Carolina, one of twelve children. My father was a farmer and my mother was a housewife.

While in nursing school I was a cadet in the Nurse Cadet Corps. I attended St. Joseph and White Rock Churches while in school. I worked a short time at Lincoln after graduating, while preparing for the licensure exam. After receiving my RN license, I took a short course in anesthesia. This course of work proved very challenging but not as satisfying as I had imagined. My work experiences included; St. Agnes Hospital in Raleigh, N.C; school nurse with a Federal Program under the Supervisor of Public Health Department in Raleigh, N.C; supervisor in the Department of Corrections Department, later known as the Correctional School for Women. I WAS FIRST Black nurse and the first RN at the Corrections Department. I had applied at Dorothea Dix Hospital after I graduated, but they would accept me only as an aid. As a continuous learner I earned the bachelor’s degree in nursing in 1965, and I continued to be involved with the Lincoln Hospital School of Nursing Alumni Association. I retired from the Department of Corrections after twenty years.

from the state archives in Raleigh:

Dorothea Dix School of Nursing Related Papers, 1905 - 1951 - The Dorothea Dix School of Nursing opened in 1902 and trained nurses through World War II, becoming a member of the U.S. Cadet Nurse Corps. After the last graduating class of 1949, the school still offered an affiliation in psychiatric nursing to students who had completed 21 months of basic nursing course from approved schools of nursing, until 1951. The bulk of this collection consists of photographs of nursing school graduating classes, covering 1930 to 1948, and including the Cadet Class of 1944. Other materials include publications, The Dorothea Dix School of Nursing, 1947, and Dixiana, 1951, and general records of the school. (1 manuscript box) 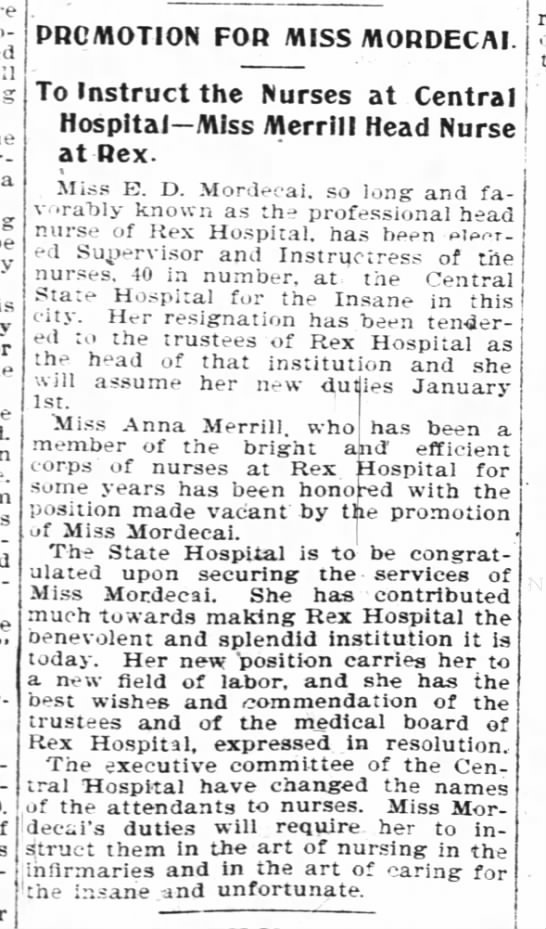 Dorothy Stevens Montague, RN,  was commissioned a 2nd Lt, upon her graduation from Rex Hospital School of Nursing, in the Army Nurse Corps as an operating room nurse on 1 May 1942. She was from Raleigh, NC. She was assigned to the 5th Evacuation Hospital in England (APO 230). She arrived in France in June 1944 as part of the invasion force.  She was from Smithfield.

This week on Flashback Friday we feature a ‘linen’ type postcard depicting the long-gone 1915 Wake County Courthouse on Fayetteville Street.

Wake County Court House, beautiful granite structure, built in 1915, cost $225,000. On the lawn, in front of Court House, stands the memorial to the volunteer nurse, Miss Eliza Riddick, who lost her life in influenza epidemic of 1918.

An early newspaper article about the first Raleigh Nurses Association ( a precursor to the NCNA) meeting;

Nursing students with pt an family at St. Agnes Hosptial in 1949 Nurses employed at St. Agnes in 1938 according to the Wake County  Telephone Directory

Other African American nurses in the 1938 Wake County Telephone Directory

The NC State Archives in Raleigh ahs the follwoing collections:

Mary Elizabeth Hospital School of Nursing, 1914-1985.  This is a scrapbook made for Dr. Harold Glascock.

NC Nurses Association, 1903-1980.  Proceedings of the Conventions, Board of Directors Minutes, etc.