Learn more about the history of nursing in Surry County

Introduction
In a 1936 Public Health Survey and Brief History Report, the following was written about the Surry County Health & Nutrition Center...

"Progress marches on and Surry County Health Department is keeping pace in all field of activity, participating and expanding the services to meet the needs of the community.  At no time in the past 35 years has the service lagged or fallen below standards. The services increase each year and as the need arises the Surry County Health Department and its staff and governing board will be there ready to meet it. There have been many difficult times as in all worthwhile endeavors, but these difficult times have better fitted us to go for bigger and better things for the future. We have a dedicated staff, as reflects in the number of years the majority has been working."

Sixty-six years later, the Surry County Health & Nutrition Center is still growing and "keeping pace" with the needs of the community. Their goal was and will always be, "to promote and protect the health of the citizens of Surry County."

From the Past to the Present
The Surry County Health Department was organized in 1920. Dr. L.L. Williams was the Health Officer. The entire staff consisted of Dr. Williams and his secretary. A nurse was added the following year. They worked out of an office in the old Mount Airy City Hall building, on Moore Avenue. In the 1920's, the Health Department operated on a $900 yearly appropriation from the City of Mount Airy and $2000 a year from the county. The city also furnished office space, fuel, lights, water and janitor services, making its contribution total between $1500 and $1800 per year. Later, the town of Elkin appropriated $1500 per year plus offices and utilities for the operation of a satellite clinic in Elkin. In 1934-35, the budget was $6,216.18 with the Health Director receiving a monthly salary of $250. By 1956, the Health Department had out grown its original offices and was relocated to the former nurses' residence for Martin Memorial Hospital on Gilmer Street in Mount Airy. The Health Department had branch offices in Elkin, Dobson, and Pilot Mountain. Today the Surry County Health & Nutrition Center is centrally located in Dobson. The original building on Hamby Road was built in 1983. In 1995, the building was renovated and enlarged to include not only the Health Department, but also the Surry County Government Center. The Government Center houses the & Nutrition Centers of Social Services, Environmental Health, Building Inspections, Recreation & Nutrition Center, County Manager, County Commissioners and Veteran Services. In 1998 the name of the department was changed to the Surry County Health & Nutrition Center to reflect the varied ways that public health protects and promotes health for our citizens. The Health Center has grown from the initial two employees to a staff of over 220 in 40 various programs with a budget of over $8 million. Public Health - Then and Now

Clinical
In the 1920's, a leading cause of sickness and death in Surry County was pellagra. Pellagra is a deficiency of B complex vitamins that leads to nerve and skin disease. In 1936, 105 cases were registered with the Health Department. After the Second World War, the federal government, recognizing malnutrition to be a major public health problem, set forth to increase the percentage of fat and protein in the populations' diet. The federal government spent money to create high-fat beef cattle and to support production of dairy products. Additionally, they supported the creation of cookbooks which taught people how to utilize the higher fat products in their daily diet. Pellagra has been eradicated from Surry County. Unfortunately, the use of increased fat and protein in diets has led to an increased incidence of chronic disease such as heart disease, diabetes, hypertension, and cancer. Nutrition recommendations now emphasize lowering fat and cholesterol in diets. In 1995, the Surry County Health Department published its 75th Anniversary Cookbook. The cookbook has a dual purpose - to promote healthier diets in our community and to raise funds for the Surry County Health Foundation. The cookbook contains recipes submitted by staff members of the Surry County Health Department in their original version. Following the recipe is an easy to follow list of ingredient and preparation substitutions to make the same dish in a lower fat, lower cholesterol, lower salt version. For more information of the Clinical History, click here. 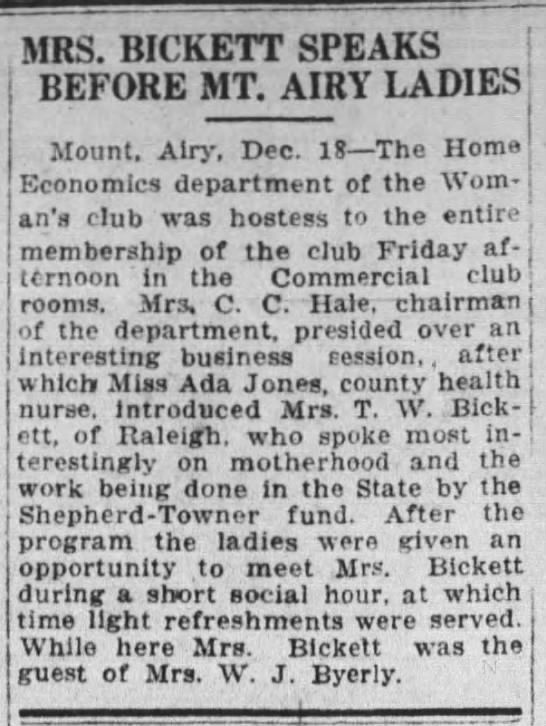