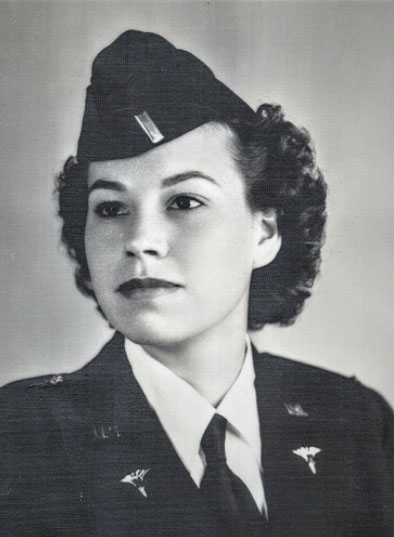 Virginia Sneed was a young Cherokee nurse from the Qualla Boundary when she joined the US Army nurse corps to fight fascism and promote democracy around the world. Despite facing racial discrimination as a child, she volunteered for overseas duty in World War II and during the Korean conflict. Her unselfish service in the face of grave danger in the service to our country deserve remembrance and honor.

Dixon was born on December 29, 1919, in Cherokee, N.C., the seventh of ten children of Campbell and Mindy Bradley Sneed. She graduated from the Cherokee Indian School in 1938. Knowing from a young age that she wanted to become a nurse, after high school she enrolled in the Knoxville General Hospital School of Nursing graduating in 1941. As a newly minted Registered Nurse, Dixon volunteered to join the U.S. Army Nurse Corps and became the first Cherokee nurse to serve overseas in WWII.

Her first post was in a psychiatric hospital in New York where she worked for three years before requesting overseas duty. Dixon was assigned to a field hospital on the Burma Road in the mountains of China. The Burma Road was built to bring supplies into China, to help Chinese people resist the Japanese occupation. Dixon remembered:

"I got orders to go to a small hospital way up in the mountains of China. And it took me two weeks or more to get there … these planes from India would fly to China and you’d have to go way up above the Himalaya Mountains … It took us several hours across the hump, where the mountains are just covered in snow … and the plane weren’t pressurized … when you got up to about 28,000 feet, the oxygen mask would drop down so you’d have to wear oxygen because it was that high. And ice was freezing on the wings of the plane. And we got to Kunming [China] and they said “We have so many planes circling you can’t land. You have to go back”. So back we went across that hump and landed … the next morning we went again, but we made it that day."

Dixon’s service to our country continued in the Korean War. She recalled:

"We were in this old North Korean hospital, but they had blown out the windows, no water, no electricity, no nothing … I worked during the day and then I was assigned at night on the surgical ward and it was hard work because we had all these casualties that were coming in. They would be in shock and we could never get them out of shock because we just didn't have heat … We stayed there … from sometime in November till December [1950] and then when the Chinese invaded, we were told one afternoon 'Get the nurses out! The Chinese are invading and we don't want them to capture any of the females.'"

After a brief respite working in a U.S. military hospital in Japan, Dixon volunteered for a dangerous assignment working for the 8063rd Mobile Army Surgical Hospital near Korea’s demilitarized zone. She provided emergency care for soldiers with brain and spinal cord injuries until they could be transported to a hospital.

Dixon returned to the US and married in 1953. After raising her children, she returned to work as a nurse at a rehabilitation center in Black Mountain, NC. She currently lives at the North Carolina State Veterans Home and recently got her COVID -19 vaccinations.