Vernice Doris Ferguson (June 13, 1928 - December 8, 2012) was an American nurse and healthcare executive. She was the nursing department head at the National Institutes of Health Clinical Center for several years, then served as a nurse executive with the United States Department of Veterans Affairs for twelve years. Ferguson held faculty appointments at several American universities. She was named a Living Legend of the American Academy of Nursing, was the second American named an honorary Fellow of the Royal College of Nursing in the United Kingdom and received several honorary doctorates.

Whatever the boys have from Daniel Slotnik's obituary for Vernice D. Ferguson

"Vernice D. Ferguson, Leader and Advocate of Nurses, Dies at 84" identifies Ferguson as a "leader and advocate of nurses," and the first paragraph explains that she "fought for greater opportunities, higher wages and more respect for nurses as a longtime chief nursing officer for the Veterans Administration." The piece shows that Ferguson faced real challenges right from the start:

At a time when few black women attended college, Ms. Ferguson graduated from New York University with a nursing degree in 1950 and was awarded the Lavinia L. Dock prize for high scholastic standing. At the awards ceremony, the director of nursing refused to shake her hand, [according to Pivotal Moments in Nursing: Leaders Who Changed the Path of a Profession, by Beth Houser and Kathy Player].

After college, Ferguson first worked at a National Institutes of Health-funded research unit at Montefiore Medical Center in the Bronx and later went on to work at several other hospitals. The piece notes that she was a co-author of papers in The American Journal of Nursing, The Journal of Clinical Nutrition and The Journal of Clinical Investigation. From 1972 to 1980, she was the chief of the nursing department of the Clinical Center at NIH. Her tenure leading nurses at the Veterans Administration lasted from 1980 to 1992, after which she "was appointed senior fellow at the University of Pennsylvania School of Nursing." It would have been good to hear more about these non-VA positions and achievements, particularly what her research interests were. However, the piece does establish that she was a clinical researcher, publishing in journals, and by extension that nurses can do such things, which does not always seem to be well understood.

The obituary has more detail about the VA job. When Ferguson took over leadership of "the agency's more than 60,000 nurses nationwide," the nation faced a nursing shortage:

Historically, the nursing ranks were overwhelmingly female, but as job opportunities began to expand for young women in the late 1970s, nursing, with its prospect of strenuous work, irregular hours and relatively low pay, was losing its appeal. Doctors, most of whom were men, were paid far more and rarely discussed medical treatments with nurses, despite nurses' hands-on knowledge of patients.

Ferguson's response, as she related it to authors Houser and Player, was: "What is good enough for the doctor is good enough for me and the nursing staff . . . Whatever the boys have, I am going to get the same thing for the girls." And in 1981 she told the National Journal that hospitals "are going to have to rethink and restructure their policies to let nurses perform nursing services and let others attend to 'hotel' services," like making beds and handling phone calls. The piece notes that Ferguson also "helped establish [a VA] scholarship program to recruit and retain nurses and made educational programs that had been restricted to doctors open to nurses as well." When she retired from the Department of Veterans Affairs in 1992, the number nurses there with a bachelor's degree had more than doubled. And the piece also seems to suggest that Ferguson's advocacy played a role in the rise in nursing salaries nationwide over the course of her career, noting that nurses' average annual pay rose from $26,826 in 1980 to $66,973 in 2008 as expressed in 2008 dollars--that is, removing inflation from the data--a remarkable rise.

This obituary portrays Ferguson as a tough and effective fighter for nursing--and one who was not averse to public recognition, at least in service to the profession. She reportedly used her considerable authority to push for parity with physicians in educational and other benefits and to resist having nurses perform non-nursing tasks, which limit their ability to do nursing and send the message that they are low-skilled. (This focus seems similar to Lydia Hall's work at Montefiore Hospital in the 1960's, though the piece does not credit Hall with this push toward leaving the nursing to nurses, an idea that is now regaining importance at institutions such as Philadelphia's Hahnemann Hospital, which has an all-RN staffing model.) Sadly, "hotel services" are just the kind of tasks we still see nurse characters doing on current Hollywood shows. On the other hand, a problem U.S. nurses and patients have confronted in the two decades since Ferguson retired from the VA is that hospitals have less-skilled workers doing nursing tasks, like taking vital signs, as a short-sighted, ineffective cost-cutting measure. The obituary's account of Ferguson's achievements is impressive on its own, but it also reminds readers of the progress nurses have made since she entered the profession. Of course, perhaps needless to say, real parity with physicians--in terms of power, resources, and respect--remains far away. Physicians are still paid "far more" and many still do not respect nurses' expertise to the extent they should, despite the improved gender balance of the medical profession. But Ferguson's career shows how much progress a tenacious advocate can make. 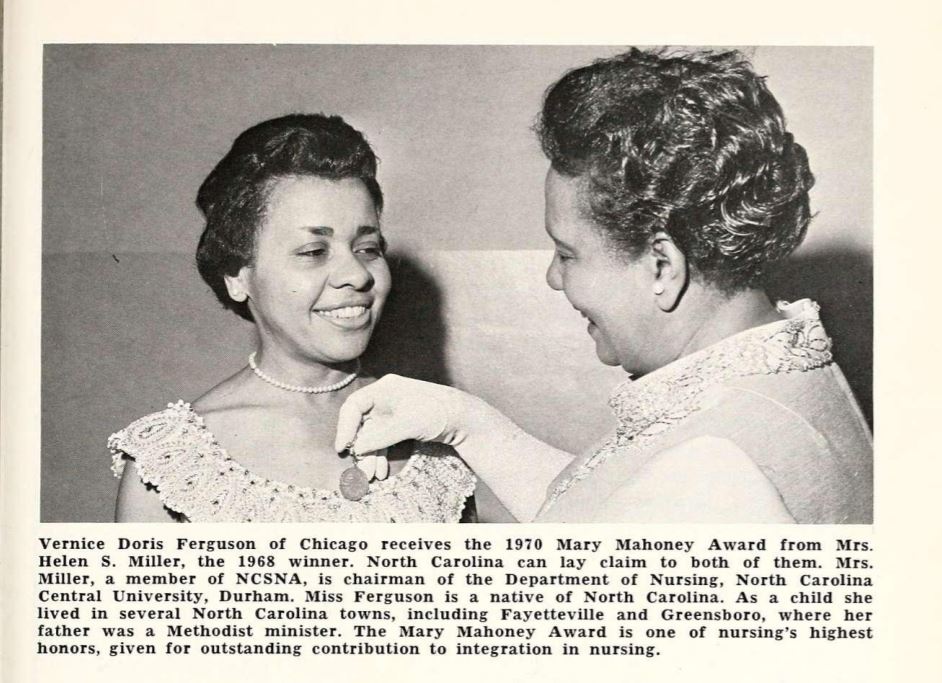