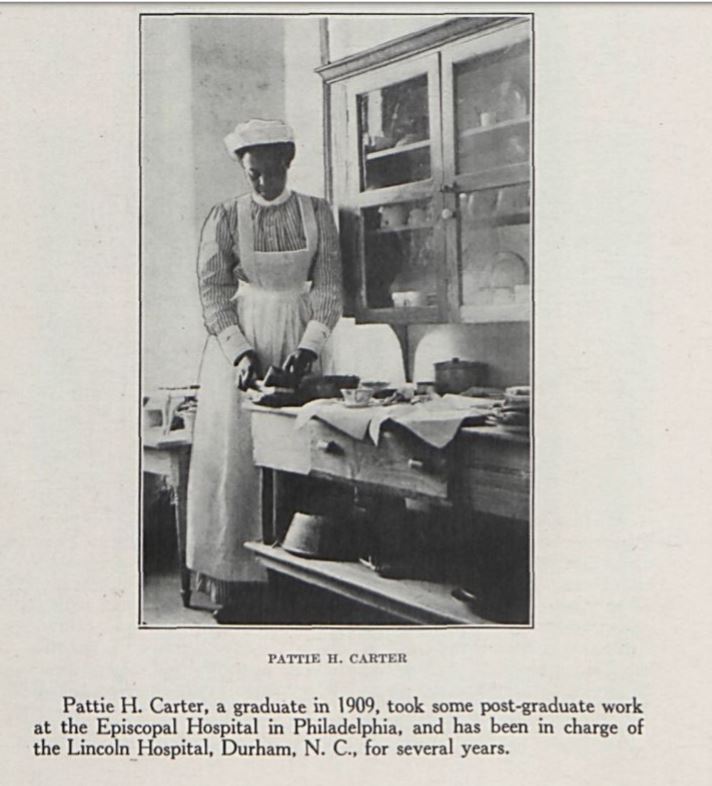 Lincoln Hospital in Durham opened its doors in 1901 as the third hospital for African Americans in North Carolina. Construction costs were met by Washington Duke and the facility was open to all patients regardless of their ability to pay. The Lincoln School of Nursing opened in 1903. Miss Julia Latta, a graduate of the St. Agnes School of Nursing in Raleigh was the first director. Miss PATTY CARTER became the director of nursing in 1911. She was born in 1875 and was the daughter of Hawkins W. Carter who served Warren County as a representative and state senator during the reconstruction era. She obtained her education from Shaw University, St. Agnes Hospital and Lincoln Hospital in New York City. During her 37 years at Lincoln she served in nearly every leadership capacity. She was known to prepare meals in the kitchen, dispense medicines from the pharmacy, mop floors and help out where needed. In 1927, William K. Boyd in The Scalpel attributed the success of the institution to her dedication and countless hours of work. (Source: http://www.unctv.org/ncnursing/aanursing.html)