From 1918 to 1921 successive waves of a novel H1N1 influenza virus killed tens of millions of people around the globe.  This disease is often referred to as the Spanish Flu.  That pandemic first appeared in North Carolina in Wilmington on September 19, 1918.  In less than a week, there were more than 500 cases in the city.  During the next few weeks, the disease spread throughout the state.  Cities and towns shuttered schools, churches, movie theaters and other public places. Warnings appeared in newspapers advising people to wash their hands, to use Vicks VapoRub as a chest salve, and to put Vaseline in their noses to trap germs. An October 26, 1918, issue of Extension Farm-News warned against shopping in person and sharing items such as drinking cups, silverware, and toothpicks, and ended with this advice: “Avoid kissing, especially on the lips.” Despite these efforts over 13,500 North Carolinians died during the pandemic.

In 1918, during the first wave of the pandemic, hundreds of North Carolina nurses were away from home, serving as Army and Navy nurses in World War 1.  With a depleted workforce, hundreds of nurses on the homefront worked long hours in primitive conditions in emergency hospitals to care for flu patients.  At least 6  of these nurses lost their lives while volunteering to help others.  Their sacrifice has been all but forgotten, but now that we are facing another pandemic, their names and deeds should be honored. Here is a list followed by more detailed information.

1. Bessie Roper from Morganton died while volunteering to nurse students at UNC-Chapel Hill.

2. Lucy Page from Raleigh died in Raleigh while volunteering at the Emergency Hospital.

3. Etta May Perkins from Morganton died while serving as a US Army nurse at Camp Meade, MD

4. Lillian Johnson from Loris SC/died while a student nurse in Waynesville, NC

5. Laura Rouseasu  from Salisbury - only African American nurse documented to have died while nursing flu patients (so far).

One of the first nurses to die was Bessie Corinna Roper. She was born on December 2, 1888 in Morganton. She graduated from Rutherford Hospital School of Nursing around 1910. Soon after graduation Roper moved to Asheville and became a private duty nurse. She accepted a case in Chapel Hill in 1918. By early October of that year, many UNC students and staff became ill and several died from the “Spanish Flu”. Roper volunteered much of her free time at the University Infirmary. Several of the students she nursed recovered, but sadly she succumbed to the disease on October 22, 1918. Her obituary appeared in many papers in the state lauding her selfless and noble sacrifice and likened her death to those of soldiers fighting on the battlefields of WWI. She was buried with military honors. Roper’s only lasting memorial was a silver tea service the Chapel Hill Chapter of the American Red Cross presented to the UNC infirmary in her honor in 1923. Nurse Lucy Bragg Page was born on October 13, 1881 in Raleigh and was a 1910 graduate of Petersburg General Hospital School of Nursing in Petersburg, Virginia. After graduation she returned home and practiced private duty nursing. In addition, Page served as treasurer of the Raleigh Nurses Association. In October 1918, half of the student body of NCSU became ill and 13 died of the flu. An additional 288 Raleigh residents succumbed to the flu in the same month. Page volunteered to nurse ailing students at the college, where she quickly caught the flu. After she recovered, she began volunteering at the Red Cross Emergency Hospital established at Raleigh High School. Page soon relapsed and died on October 31, 1918, only nine days after nurse Roper lost her life.
The deaths of Page and a volunteer who helped in the infirmary, were commemorated with a Nurses Memorial water fountain at the Wake County courthouse. Its’ inscription read:
TO THE VOLUNTEER NURSES / ELIZA RIDDICK AND LUCY PAGE / WHO GAVE THEIR LIVES / AND OUR OTHER NOBLE WOMEN / WHO RISKED THEIR LIVES / IN MINISTRY TO THE VICTIMS OF INFLUENZA … 1918.
Sadly the fountain was removed during construction of the new courthouse in 1967-68. Its current whereabouts are unknown. 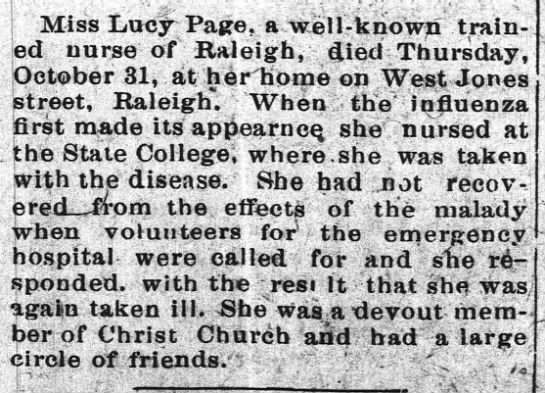 Nurse Etta May Perkins was born in Morganton on May 1, 1888.  She graduated from Dr. Long's Hospital in Statesville in 1913 and then worked at hospitals in Henderson, Hickory and Greensboro.  When World War 1 started, she enlisted in the US Army Nurse Corps through the American Red Cross.  She died on October 5th at Camp Meade, Maryland while nursing soldiers who were stricken with the flu.

Etta (“Ettie”) May Perkins, age 30, of Morgantown, NC, died 4 October 1918—Received nursing license in 1913; worked at a sanatorium in Statesville, NC, and as a superintendent of Sarah Elizabeth Hospital, Greensboro. “A young woman of striking personality, strong will power, dependable and worthy of confidence and esteem”—Morgantown News-Herald

Lillian Marion Johnson, a nursing student at Waynesville Hospital also died while caring for influenza patients in October 1918. Funds were raised to furnish and decorate a patient room in her honor at the hospital. 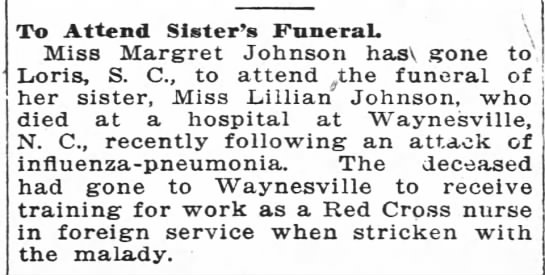 Laura Rousseau of Salisbury was an African American nurse who worked at the Emergency [influenza] Hospital in Salisbury where she contracted the virus and died on Feb 24, 1920. 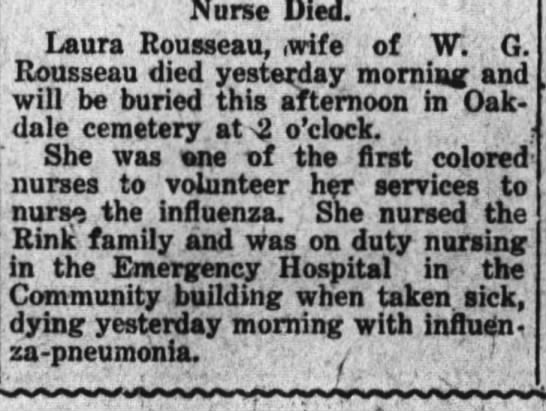 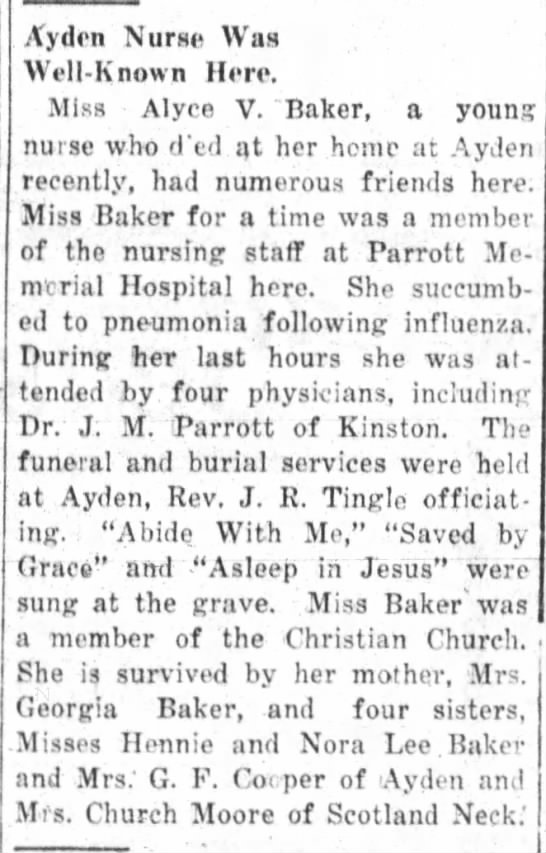 Nurse Sybil (Sibby)Kelly, was a private duty nurse in Wilmington in 1910 and then a nurse at James Malker Memorial Hospital in Wilmington.  She was born on August 7, 1881 in Union County, S.C.  and died of influenza pneumonia on Sept 27, 1918 in Wilmington.  Her death certificate states she was a Red Cross Nurse. Mamie Setzer of Newton in Catawba County was a nursing student in Baltimore where she contracted the flu and died. 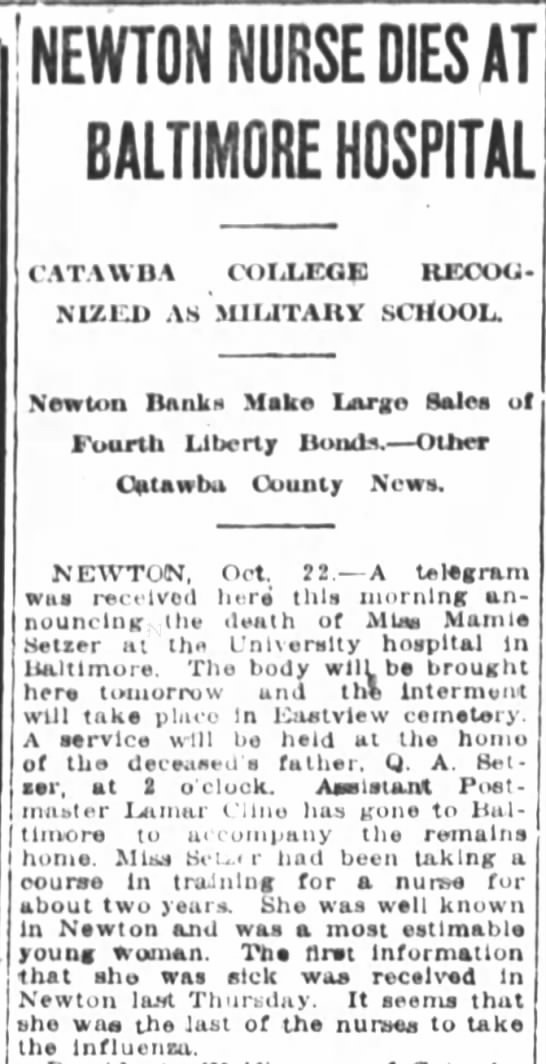 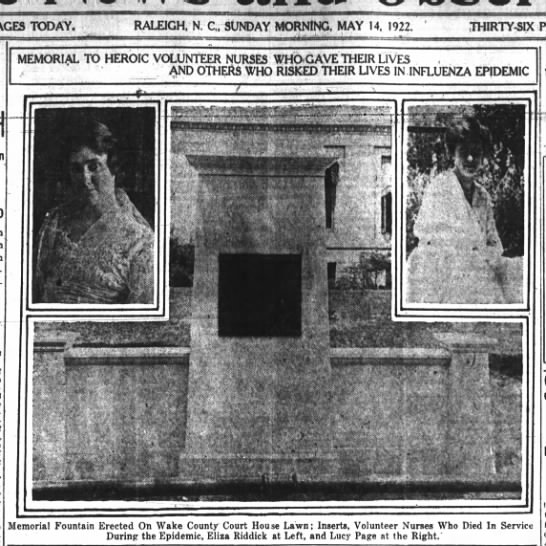