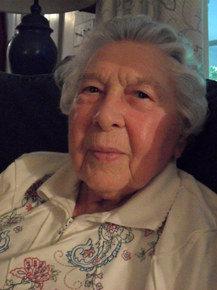 Margaret Lucille Covington, 92, served in the Naval Nurse Corps during World War II. She was present at the invasion of Okinawa, and helped collect soldiers on stretchers, drop off supplies and administered medicine on the plane.

Margaret Lucille Covington was born in 1919. Her friends know her as Lou. She is a World War II veteran and will be attending the Flight of Honor to Washington, D.C., with other WWII veterans. Her close friend Myra Dean will accompany her as her guardian.

Many soldiers made it home from foreign battlefields due to flight nurses in the Navy Nurse Corps.

Covington was one of the first to join the Navy as a nurse. She was stationed in Guam, where her plane, a Douglas Aircraft hospital plane, would fly into Okinawa. The flight nurse, along with a few corpsmen, had 45 minutes to drop off supplies and cargo and to load up injured soldiers.

“We were just busy,” she said. “There were injuries everywhere. We took the most injured, and triaged them. We took enemy fire. There was fighting all around us.”

Covington landed on the beaches of Okinawa, the day of the invasion.

“I remember how wonderful the patients were,” she said. “They were so grateful.”

The soldiers were placed on stretchers and stacked in the plane. Covington said they didn’t complain and were friendly and thankful for the help. She said penicillin has just come out, and to administer it, she would often have to climb up the stacked stretchers like a ladder and hang on with one hand while injecting with another.

Covington said when she signed up she had never flown on a plane before, and it made her throw up. The plane had to be flown at a certain altitude because the cabin wasn’t yet pressurized.

“We had head injuries, which you had to be real careful with, and we had broken bones and shrapnel wounds. We flew them to Guam. It took about eight hours. I never had a complaint. We lost one or two but we took them just in case. A lot we left there (on the battlefield), because it was better. You knew it was the best thing, because they wouldn’t make the trip.” 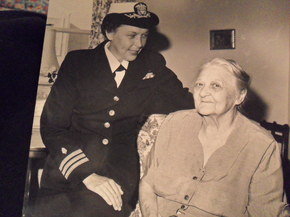 Covington is a Rockingham native, and graduated high school here. She pursued her nursing career, and the path lead her to the Navy. The Navy sent her back to school after her one-year station in Guam, to the University of Colorado, where she earned her bachelor’s degree in nursing.

She spent two tours at Charleston and one at Oakland, Calif., where she received patients off of ships coming home from the South Pacific. She also served as a hospital supervisor. She was instrumental in the building and establishment of a Naval hospital in Puerto Rico, and, on a clear day could see Cuba from where she was stationed. She was home during the Cuban Missile Crisis, and rushed back to Puerto Rico because she felt she may be needed to receive the wounded.

Covington served as a Navy recruiter during the ’50s and early ’60s in Raleigh, but didn’t enjoy it.

“I didn’t like paperwork,” she said. “I didn’t want to sit behind a desk.”

She was discharged at Portsmouth, but only after achieving the rank of Commander, which was rare for women at that time.

“I was up for Captain but I wanted to come home,” she said. “I didn’t want to give it another three or four years.”

Although no longer in the Navy, her career as a nurse didn’t end. Covington went on to teach nursing at RCC and SCC, and served as Chair of the Nursing Department.

She has been active in her retirement as well. According to Dean, Covington delivered Meals on Wheels well into her 80s. She has been actively involved with her church and community. She now resides in Scotia Village in Laurinburg, and has given lectures on veterans for Veterans Day and other veteran functions.

“It’s really nice of Rotary to do this for the veterans,” said Dean.

The Flight of Honor to Washington, D.C., leaves on Sept. 17. The WWII veterans will visit the WWII memorials and sight-see in D.C. while being pampered by guardians who have volunteered their time to ensure the veterans are cared for and well hydrated. The trip is sponsored by Rotary International, local rotaries and veterans organizations and donations from the public. The trip is no cost to the veterans that attend.