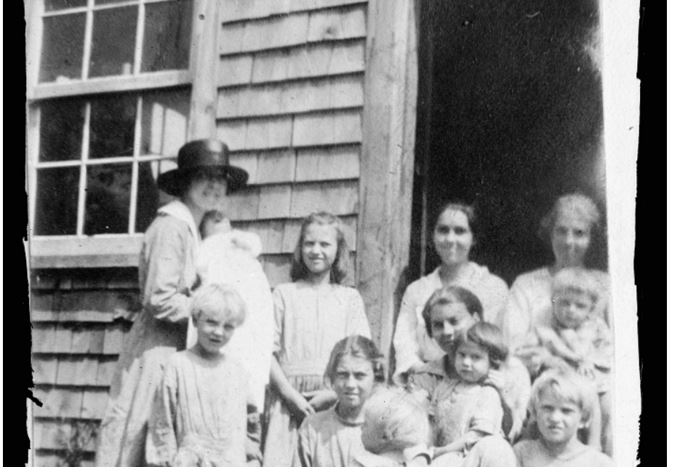 Above image: Maragaret Harry with Macon County students she helped enroll at Lincoln University in Tennessee.

Excerpt from article by Donna Rhodes (2016)

In the early 1900s, Highlands’ go-to doc was the highly-regarded Dr. Mary E. Lapham. When she left to head a Red Cross Mission in war-torn Europe, the Red Cross sent a trained nurse replacement, Miss Margaret Harry, to work with the mountain folk.

From 1920-28 Margaret ran a five-bed health clinic in Highlands’ Masonic Hall. Town folk were so fond of Margaret and her mid-wifery skills, they often named their children after her: girls, Margaret and boys, Harry. She climbed many a mountain and forded scores of streams in her rickety old wagon to deliver her namesakes, treat snakebite, or set a bone.

She was a wisp of a thing, weighing less than 100 pounds, but she could stand toe-to-toe with any male counterpart. She was regarded as the Florence Nightingale of the Blue Ridge. The Atlanta Constitution called her “Angel of the Mountain People.”

But even Mighty Margaret had a chink in her armor. She was deathly afraid of cows. On a nursing mission she decided to cross a pasture. A curious bovine spotted her and trailed along behind. Terrified, Margaret climbed a tree. The cow was content to graze under the tree all day. Margaret was just as determined to stay aloft until the cow left for greener pastures. Luckily Margaret had brought a sandwich to sustain her. At day’s end, the cow ambled off and Margaret shinnied down the tree, hoofin’ it home.

Cows may have left her cold but a good practical joke stoked her fires. T.T. Hall recalls a classic. He was accompanying her on a nursing call when they ran across a horse skeleton on the Rhododendron trail. They rearranged the bones to look like a human skeleton, leaned it against a tree, and dolled it up with false teeth and men’s clothing. The coroner was summoned. On first glance he knew it was a prank, but he played along, giving everyone a satisfying guffaw.

In spite of Margaret’s bovinophobia, you’ve got to hand it to her. She knew how to milk a moment.