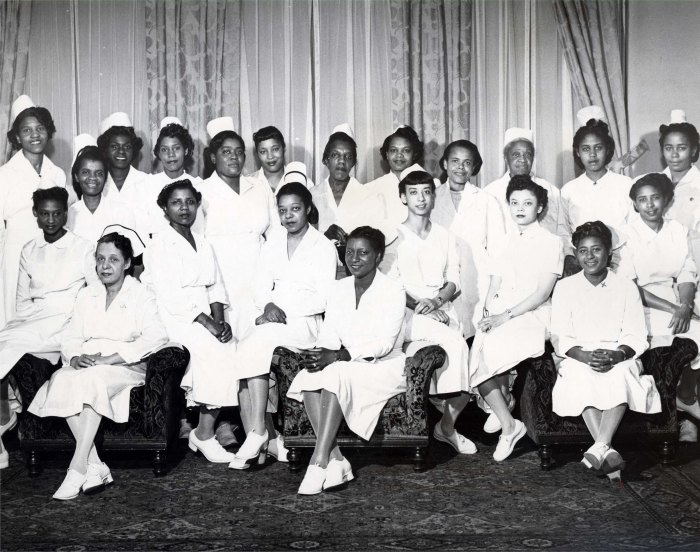 Lula Gertrude Renwick Warlick, RN was one of many African-American nurses from the Jim Crow-era South who forged their careers in the Midwest and Northeast. A native of Lincolnton, NC, Warlick attended nursing school at the Lincoln Hospital School for Nurses in New York, graduating in 1910. Warlick went on to hold supervisory positions at Provident Hospital in Chicago and Kansas City General Hospital No. 2 in Missouri before she became the superintendent of nurses at Mercy Hospital in 1920.

At Mercy Hospital, Lula Warlick gained a reputation as a stern leader who demanded excellence from both students and staff. For instance, when Ms. Warlick wanted to discipline a student nurse, she would take their cap away in public. The cap was a symbol of professional dignity, therefore its removal constituted a deep humiliation. However, Warlick wasn’t a sadist who derived pleasure from making her charges suffer needlessly, she was a realist who understood what is now known as the ‘black tax,’ which is the notion that African-Americans have to work twice as hard to achieve parity with their white counterparts. In a segregated health care system, the nurses of Mercy Hospital faced a career where most of the doors would be closed. Lula Warlick trained her nurses to be tough enough to break those doors down if necessary.

In addition to being a tough superintendent, Lula Warlick worked hard to innovate and lead Mercy Hospital School of Nursing to excellence and community engagement. For instance, she lectured a course entitled “Ethics, Professional Problems, and Survey of the Nursing Field,” which focused on providing students with practical solutions to professional issues. The school also led initiatives to educate on health and sanitation by holding lectures at area churches. In 1924 Warlick instituted a four month course affiliation in public health nursing where students trained at the Henry Phipps Institute and the Visiting Nurse Society. In addition, Mercy Hospital received endorsement by the Pennsylvania State Board of Examiners for Registration of Nurses, the Philadelphia Chamber of Commerce, and the Welfare Federation of Philadelphia.

Warlick retired in 1943 after twenty-three years of service. In a document published by Mercy Hospital entitled “For the Health of the Race,” it is noted that the high standards of the hospital were not only a testament to the city of Philadelphia, but to the work of African-American people across the nation, which speaks to the importance placed on providing health care to the community during this time, as well as the monumental significance of nursing administrators like Lula Warlick, who left a lasting impact on the surviving members of the Alumni Association of Mercy Douglass that is felt to this day.