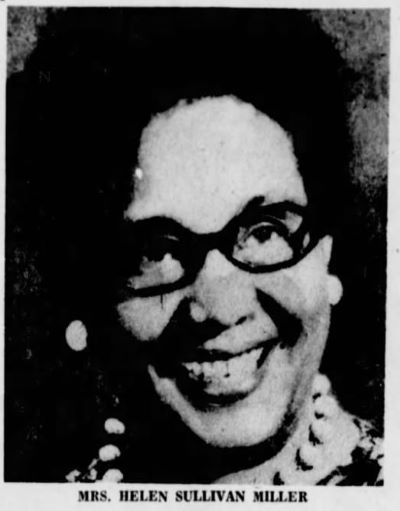 Helen Sullivan Miller, RN, BSN, MSN, CNM came to North Carolina (NC) to Chair the Department of Nursing at NC Central University (NCCU) in Durham, NC. Dean Miller earned a Diploma in Nursing from the University Hospital, Augusta, Georgia, and degrees from the Medical College of Virginia (Bachelor of Science in Nursing), the School of Midwifery at Tuskegee Institute (Certified Nurse Midwife) , and Yale University School of Nursing (Master's of Science in Nursing). Miller served in the Army Nurse Corps during World War II.

A born leader, Miller was the first African American nurse in be elected the president of a district nursing association (District 11) in NC, and to receive a gubernatorial appointment to the NC Board of Nursing (1966-1970). Miller oversaw both the integration of the NCCU nursing program in the 1950s and the successful growth of the NCCU nursing program from a certificate program in public health nursing to the first RN to BSN program in North Carolina (1961) to a 4 year baccalaureate program of nursing (1969).

Miller had an intense interest in nursing history and authored books about Mary Mahoney, the first African American nurse in the United States, the African American Chi Eta Phi Nursing Sorority and a biographical dictionary of exceptional nurses of color. For all of her accomplishments, in 1968, Miller was the first North Carolina recipient of the Mary Mahoney Award from the American Nurses Association. In 1978 she was given the Distinguished Alumnae Award from Yale University.

My philosophy is based upon a personal value system and longstanding religious beliefs. Because of these values and the current state of society with its effect on the profession, at times frustration occurs.

I find, however, consolation in a poem, whose author is unknown which I learned as a student nurse and which remains with me vividly, even today. It goes like this:

If history is correct, the foundation of our profession was laid by Christian men and women. They had concern and compassion for their clients/patients that was interwoven into their nursing care. It was visible. Patients/clients could see and feel the effect of this concern and compassion. I sometimes wonder if we as modern nurse educators see this aspect of our early beginning as ancient and outmoded. Granted, we live in a different world, but patients/clients are still human beings. The more we find opportunities to utilize care and compassion with our clients and their families, the more satisfaction we will derive from our profession.

This is my philosophy of nursing.

She was the first black to receive a gubernatorial appointment to the North Carolina Board of Nursing and the first black to be elected president, District Eleven of the North Carolina Nurses Association, to mention only two of a long list of past appointments and memberships. Among her current memberships are the School of Nursing Alumnae Association, Yale University; National Council of Negro Women (life member); Chi Eta Phi sorority (life member); National Black Nurses Association; and National League for Nursing.

She was the first in North Carolina to receive the Mary Mahoney Award from the American Nurses’ Association. She is cited in numerous biographical services: Who’s Who Among Black Americans; Personalities of the South; Minority Groups in Nursing: A Bibliography; Black Nursing Pioneers, Leaders, and Organizers; Contributions of Black Women to America: 1776-1977; Community Leaders of America; The World Who’s Who of Women; Highlights in Nursing in North Carolina; Abstracts of Nursing Research in the South (vol. 1); and Who’s Who of American Women.

Her publications include The History of Chi Eta Phi Sorority, Inc., the forthcoming Biography of Mary Eliza Mahoney, R.N., The First Black Professional Nurse in the United States, and numerous articles.